Discretion versus rule-based budgeting and assignment in Indian governments 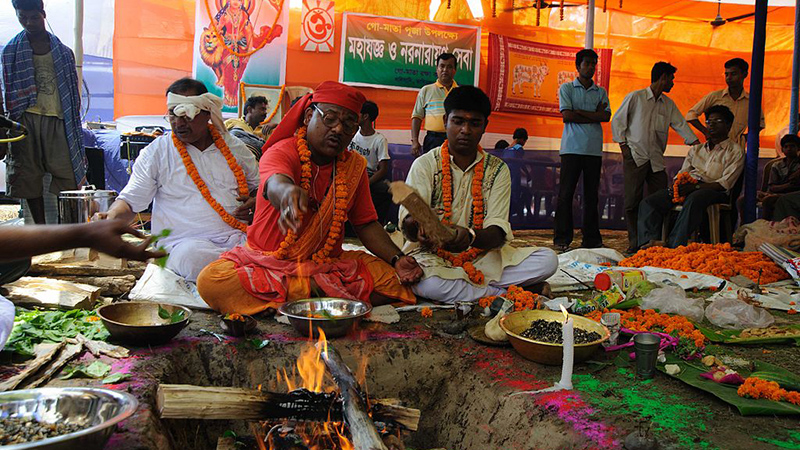 A prayer for a political candidate (Source: Wikimedia / Goutam Roy)

Background motivation for the research

The literature on decentralization and service delivery in developing countries has largely focused on problems of political accountability of local government leaders, owing to possible ‘capture’ of these leaders by local elites. Numerous studies have shown how intra-jurisdictional allocations exhibit significant anti-poor biases in areas with high socio-economic inequality, illiteracy and remoteness. In contrast, relatively little attention has been devoted to problems of accountability of elected officials at higher levels of the government, particularly with regard to how they allocate resources across local governments. Political motives of elected officials at higher levels of governments to manipulate intergovernmental transfers could conceivably result in significant distortions in allocations across communities. To the extent that this does happen, there is scope for formula bound transfers to local governments based on publicly available measures of backwardness and need to result in improved targeting of benefits.

Details of the study

In this project, we examine political incentives of upper tier governments to manipulate allocation of resources to local governments in the Indian state of West Bengal.

The research we have done so far establishes that electoral motives significantly affected the allocation of resources across local jurisdictions. Specifically, utilizing household surveys of government benefits received between 2007-2011 from a sample of 89 villages drawn randomly throughout rural West Bengal, a plausibly exogenous shock to competitiveness of specific constituencies (resulting from a politically neutral process of redistricting implemented in 2007), we find an increase in electoral competition increased private benefits to villages where the local government was controlled by the same party as the higher level government. The effects were particularly large in the case of short-term recurring benefits such as employment in public works programs, subsidized credit and agricultural inputs, rather than long-term one-time benefits such as access to low income housing, sanitation, drinking water or identity-cum-ration cards for subsidized food and fuel. We also find that the short-term recurring benefits were more effective in mobilizing votes for the incumbent party, thereby rationalizing the observed inter-jurisdictional allocation patterns.

We subsequently plan to explore how politically motivated transfers affected the most vulnerable sections of rural West Bengal – the landless and the socio-economically disadvantaged classes (Scheduled Castes and Scheduled Tribes). A comparison of observed allocation patterns with those that would result from formula-bound transfers will give us a measure of extent of distortions caused by political manipulations by upper level governments, and enable us to explore the targeting implications of different formulae for transfers.