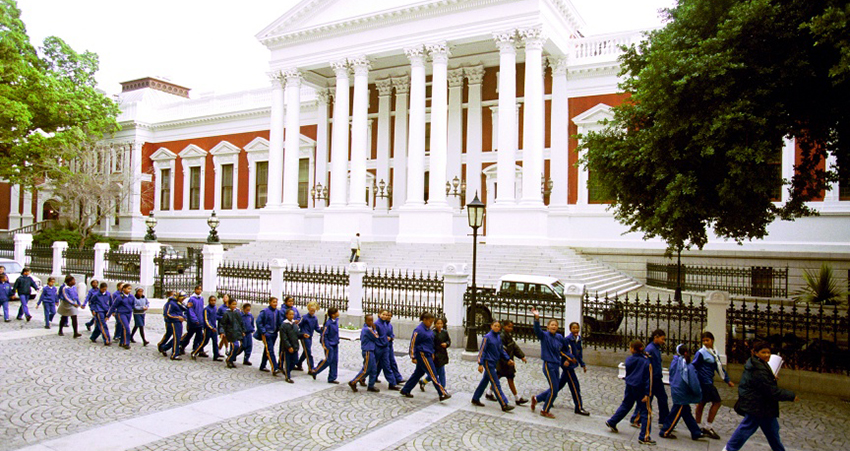 The outside of Parliament in South Africa (Source: World Bank/Trevor Samson)

Our key research question is: How can a political and economic equilibrium be changed so that the economy embarks on a new development path that is not derailed irrespective of who governs?

This question is important for all countries where unequal wealth and income generate unequal power — and in particular for developing countries. It is relevant for both those who want and those who don’t want more equality.

We aim at modelling a political and economic equilibrium where inequality is a catch all word for a wide range of economic and political disparities. Our model can be described as this:

Our model allows us to distinguish between assets and income, and thus between the redistribution of wealth and earnings. Our perspective suggests that to change the political and economic equilibrium and to induce a new development path one has to change many factors simultaneously. The sustainability of the path depends on the specific details of the political and economic system in addition to the general distribution of initial endowments.

Those who want more equality may ask: What works best? To redistribute the in-egalitarian outcomes of unequal wealth, or to redistribute wealth in a egalitarian way? Similar considerations – but with the opposite objective – may apply for those who want to preserve the present inequality and power. What kind of seemingly sensible and needed reforms are least likely to alter the present distribution of power and pay?

The project aims at exploring how both sides may try to apply changes in the distribution of assets and income strategically to achieve their long term goals. We are particularly interested in how the defenders of status quo and an egalitarian opposition may use distributional policies to achieve their objectives in countries like Zimbabwe and South Africa.