In 2015, Kenya’s President Kenyatta launched the Last Mile Connectivity Project (LMCP), whose goal was “to connect one million new customers to electricity each year” and achieve universal household electricity access by 2020. The USD 500 million program — one of Kenya’s largest public programs, financed largely by international aid agencies — would extend Kenya’s low voltage network to every household located within 600 meters of more than 13,000 sites nationwide. The program also sought to reduce red tape. The old process of applying for electricity — often requiring months of paperwork — would be replaced by a system where Kenya Power contractors initiate connections, with minimal effort from households.

Concerns around corruption are widely thought to threaten the quality, cost, timeliness, and equity of the construction process, and contribute to significant leakage The LMCP is just one example of many infrastructure projects financed by international agencies. To prevent corruption and improve construction quality, such projects are often accompanied by stringent conditions over how local implementing agencies are to use these funds. But do donor conditions actually improve infrastructure quality on the ground? And, could additional independent monitoring improve accountability?

To answer these questions, we leverage the fact that LMCP sites in our study were financed either by the World Bank or the African Development Bank (AfDB). The AfDB uses a ‘turn-key’ approach, where each contractor completes sites from start to finish. The World Bank, on the other hand, segregates the process so that the design, procurement, and construction in each region are conducted separately, requiring more than 40 different private contractors. Since stages were completed consecutively, the bidding and contracting for each stage paused progress for months at a time. This bureaucracy also added significantly to Kenya Power’s workload.

Kenya Power selected LMCP sites together with the relevant Member of Parliament in each constituency, and there was no systematic process by which sites were assigned to be financed under one aid agency or another. Almost all constituencies in Kenya contain at least one World Bank site and one AfDB site, allowing us to control for factors that may vary across the country. Figure 1 shows LMCP construction sites financed by the AfDB and World Bank, nationwide and in our study counties (Kakamega, Kericho, Kisumu, Nandi, and Vihiga).

Panel A: Site locations across Kenya; Panel B: Our 5 study counties 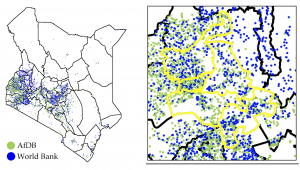 To investigate whether independent monitoring can improve construction outcomes, we implemented randomized monitoring. We notified contractors that an independent, international team of engineers will audit selected sites after construction. The notification was signed by management at Kenya Power, the World Bank, and the AfDB, specifying which sites would be audited, and that results would be shared publicly. Contractors depend on their repeated relationship with international organizations, so improved perceived construction quality could help them win future contracts. Because the sites included in the notification were randomly selected, we can attribute any difference in construction quality to the monitoring treatment.

Answering these questions required a massive data collection effort unusual in development economics. We study over 350 communities spread over five counties. At each site, surveyors monitored construction progress over time and conducted novel, on-the-ground, technical engineering assessments of new construction. At each site where construction had been completed, the surveyors collected:

Figure 2 displays an example of a site where we completed on-the-ground engineering surveying. 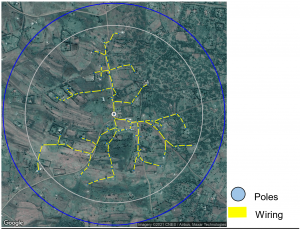 While we are still conducting data analysis, our preliminary results suggest limited overall differences in quality between World Bank and AfDB sites. In fact, along some measures, AfDB-funded sites had more features of high-quality construction than World Bank funded sites. . However, more stringent donor conditionality may come at a cost. The bureaucratic process added 18 months of construction delays: by November 2017, the AfDB had completed Phase I and was beginning Phase II, while the World Bank was only just wrapping up the contracting for its own Phase I.

Our large-scale study of Kenya’s nationwide electrification project suggests that stringent donor conditions can delay contracting and implementation, with limited impacts on construction quality. However, independent monitoring may improve construction outcomes at lower cost and with fewer up-front delays. We continue to analyze data, and look forward to sharing detailed results soon.