Home News & Events General Blog: How to strengthen women’s land rights in Africa? Some evidence from an experiment in Uganda

Blog: How to strengthen women’s land rights in Africa? Some evidence from an experiment in Uganda 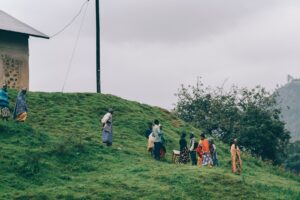 Photo by Random Institute on Unsplash

Strengthening women’s land rights can play a central role in the process of economic development. The issue is particularly pressing in Sub-Saharan Africa as countries in the region increasingly adopt land formalization reforms, often in the context of traditional (patriarchal) customary land tenure systems that tend to be biased against women. A potential concern is that without accompanying measures such policy efforts could formalize – even exacerbate – existing gender gaps in land rights.

What may such measures look like? To answer this question, we conducted an experiment in rural Uganda in partnership with the Ministry of Lands, Housing, and Urban Development. The experiment took place in the context of a land tenure formalization intervention offering smallholder famers free freehold land titles. We wanted to see what could work to ensure that married couples would include the woman’s name on the title as co-owners of the land with their husbands. We tested three alternative strategies.

One possible solution is to ensure that women participate in the decision-making process.

Another strategy is to work directly with men and try to reshape their preferences for equality, persuading them to believe that they too can gain from an improvement in their wives’ stake in the land. Prior to deciding whether to accept the title and which names to include in it, we showed participants a short video clip illustrating the advantages to the family of strengthening married women’s land rights through joint titling. The issues made salient were not necessarily new to the participants. For example, a key message was that giving strong land rights to a married woman is an instrument through which the land is kept for the children upon the husband’s death, instead of potentially being captured by other relatives. This is a well-known issue in customary settings. But as DellaVigna and Gentzkow note, “non-informative dimensions may affect belief formation through channels such as framing, salience, and attention.”

An alternative route is to adopt “hard” affirmative action.

Following previous work by Ali et al. (2016), we tested the impact of making the land title offer conditional on the wife’s name being added to the title. While pragmatic and easy to implement in the field, we were concerned that this strategy could dissuade some men from titling altogether. This is because, from a man’s perspective, this conditionality generates a trade-off between an increase in land tenure security provided by a (joint) land title and a potential reduction in his power within the household.

So, what did we find?

The results were striking. We found that when the intervention was targeted to husbands, on the day the land title offer was made only half chose to add the wife’s names on the title as joint owner of the land, while essentially the other half chose to put only their name on the title as the sole owner of the land (only 5% rejected the land title offer). But exposure to the video persuaded the majority of husbands to add their wives’ names on the titles (73% did so). In contrast, when the information was targeted to couples, most (68%) chose to add the wives’ names on the titles, while only a few (16%) excluded their names (and almost 16% opted out of titling altogether).

This pattern of heterogenous responses to the video across husbands and couples is not entirely surprising. Women’s beliefs about the benefits of joint titling are likely more attuned to the issues salient in the information treatment, and so to the extent that targeting couples enables the wives to influence the decision we should expect couples to be less impacted by it. When the wives are not present, however, the information treatment inspired the majority of husbands to put their wives’ names on the land titles.

In line with the results in Ali et al., we also found no evidence that imposing the conditionality reduced overall demand for titling, suggesting that men appear to be willing to trade off a reduction in bargaining power for an increase in land tenure security provided by a (joint) land title.

These results suggest that there are simple and cost-effective ways to increase women farmers’ formal land rights. We are currently analyzing whether over time households’ that participated in this experiment stick to their original titling decisions. A natural question is what are the downstream impacts of strengthening women’s formal land rights? Do women feel more secure as a result of having a land title? Do they start investing more on their land or channeling their efforts to more productive activities now that their land rights are stronger? Or is tenure insecurity just one of a myriad of challenges female farmers face, and that without also addressing those other challenges strengthening their land rights has little or no effect? Preliminary evidence from a recent quick phone survey reveals that women in our sample assigned to the land titling intervention report significantly higher levels of perceived tenure security than women in a control group. This is very encouraging, but to better understand these questions we will be collecting long-term follow-up survey data, and have overlayed the land titling intervention with a cash grant intervention aimed at also relaxing liquidity constraints hindering investment.